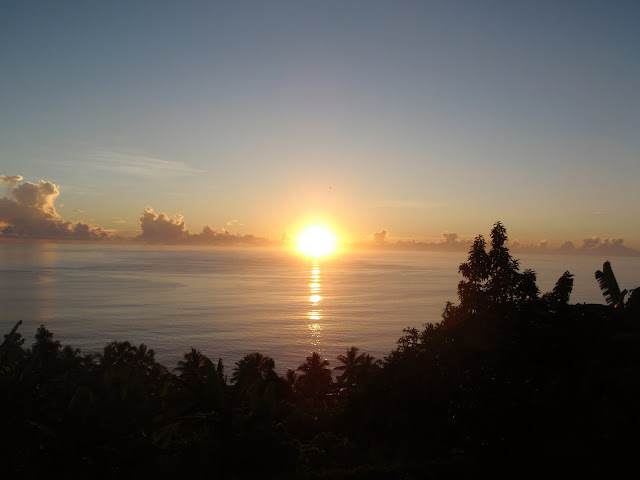 
There is a place in central Bougainville called Panguna. It sits high in the mountains, a valley surrounded by rainforest and shrouded in mist.

Once upon a time, that's all there was. But a significant deposit of copper was discovered there, and one of the largest open cast copper mines in the world was excavated. It is said that the mine is so deep that it's base is below sea level. The volume of rubble, or tailings, removed from the ground was so large that they were slowly filling a valley from the bottom to the top, a man made plain in the middle of a mountain range. They hoped to build an international airport on it once enough of the valley was filled.

The relative impact on Bougainville was just as big. Arawa, the old capital city for the former province, was a plantation before the mine was opened. However, they needed a town to support the workforce, so an entire town was constructed.

The local workforce could not of course provide the depth and breadth of skills required for such a project, so soon a large community of PNG nationals and foreigners moved in. That workforce wished to be serviced by high quality health and education facilities, so the community was supported by the best health care in Papua New Guinea and the schools were also of a high standard.

Then there were the returns on the profits. Panguna mine accounted for approximately 45% of Papua New Guinea's Gross Domestic Product at its peak, extending the impact of the mine to development of Papua New Guinea more broadly. It made a lot of men rich, and as often happens, created a lot of envy as well.
In 1989 a group of men led by a Mr Francis Ona brought down a pylon and shut down the mine. Soon after a civil war erupted between Ona's Bougainville Revolutionary Army and Papua New Guinea. The mine was closed and has remained so ever since.

Panguna now is a landscape of bare bones and broken earth. Scavengers have pillaged any scrap metal they could easily remove, leaving skeletons where factories and processing plants once stood. The mine itself is a great, gaping hole in the earth, its insides gathered up in piles to form man made hills or sold in foreign markets.

What was once the centre of economic activity for a country has now become an eerie wasteland peppered with scrap metal, decrepit vehicles and fallen weapons. I wonder if the local landowners or the foreign surveyors ever foresaw that this would be Panguna's future?
Posted by Wolfy at 8:16 PM

people and greed. a common mix.

A referendum in Bougainville said...
This comment has been removed by the author.
Friday, 19 November, 2010

As one of the children who grew up on Bougainville, I grieve for this beautiful island. Yes it was a business but it was our home and everyone has to work in a business to earn so that we live. Those who grew up there, myself and my partner included, just had mums and dads who went to work. We went to school, the beach, the supermarket, played with each other and even tell in love as teenagers. We just had a home we loved. We miss the friends we grew up with, though I was lucky enough to find my soulmate again, as we were scattered around the world as our families had to return from whence they came. We are a generation of kids who feel like refugees though the rest of the world sees us juts as ex-pats returned to our homes. Bougainville was our home and we miss it.